Caramel Frappuccin-uh-oh! Someone put a cupcake in my frappe!! 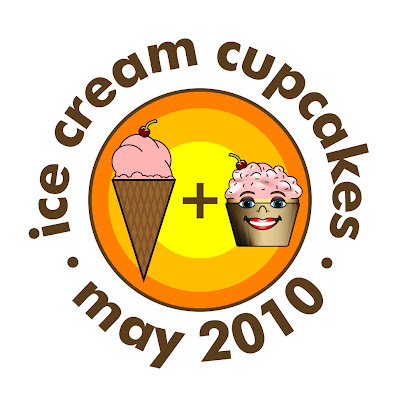 So my entry into the 2010 Ice Cream Cupcake Roundup sponsored by the Cupcake Project and Scoopalicious was inspired by my love of Starbucks.

Originally, I intended this entry to taste like a caramel Macchiato, which, as Starbucks proudly states, consists of "creamy vanilla-flavored syrup, freshly steamed milk with a topping of velvety-rich foam, an intense hit of Espresso Roast, and a finishing of buttery caramel drizzle". Sounds yummy, right?

Well, after making the cupcake, which is amazing & I will detail after, my guinea pig husband and I concluded it was more like our favorite cold Starbucks beverage which is a Caramel Frappuccino. Again, for those who live under a rock,  a Frappuccino is a frozen drink that is made with bold coffee, ice, caramel (for a buttery sweetness), real whipped cream and drizzled with more caramel. Of course there is stuff in teh Frappuccino mix to make it the wonderful addiction that it is, but Starbucks won't quite tell ya that part. that's ok though,this cupcake tastes like it!

So, with it being said how we arrived at what it tastes like, the name.... It's like Cake & Frappuccino all in one. I seriously had my doubts of icing with ice cream and cake but OMG! These are seriously amazing! I cant wait to make them for my family who spend too much money on these frozen drinks.

Not only do they look pretty, they taste better than they look!

CUPCAKE (recipe here): It's a semi-airy coffee & vanilla cupcake. It's made with pure vanilla, fresh, stong coffee, and coffee grounds. It tastes wonderful on it's own. But then sandwiched in the middle of the coffee cupcake is ice cream. Since the cupcake was cut in half (to "sandwich" the ice cream), it was brushed with the strong coffee for added coffee flavor much ion the way one does for tiramisu.

ICE CREAM: It's vanilla bean ice cream with coffee beans as well swirled with homemade caramel. Frozen on a sheet pan and cut with a circle cookie cutter.

CARAMEL (recipe here): So easy to make and the taste is worth it! Also used to drizzle on top of the whipped cream.

CARAMEL CREAM CHEESE BUTTERCREAM BLISS (recipe here): As I have said in the post with the recipe, this is a MUST TRY! It is just amazing and almost leaves those who try it with no words. I topped this off with whipped cream.

WHIPPED CREAM: Extra heavy Whipping Cream and a tiny amount of white sugar whipped until it's perfect. Then it's drizzled with the homemade caramel sauce.

Now the pretty picture y'all have been waiting for...... 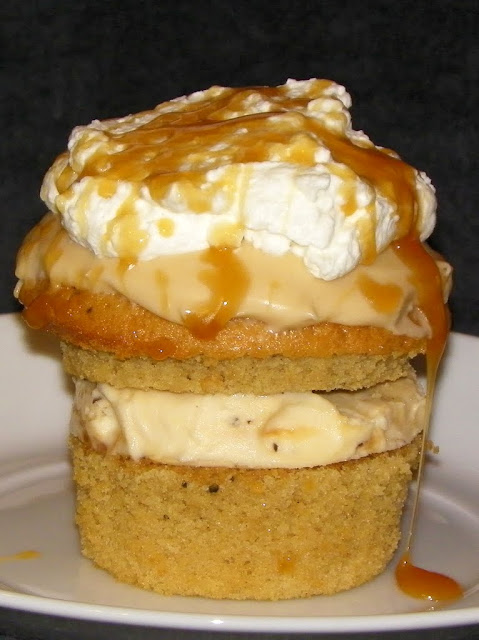